What Could This Mean for Youth Relationship Education?

The Bottom-Line (at the Top): Recent research has found shifting trends among youth in two important areas: marriage attitudes and mental health. A substantial drop seems to have occurred in the percentage of youth who consider getting married to be important to them personally. Furthermore, researchers are finding large increases in mental health problems, such as depressionand anxiety, among teens. How might these trends affect youth relationship education? 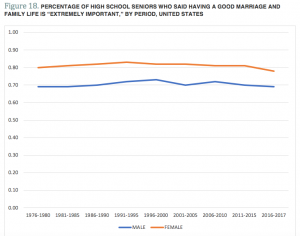 However, the Pew Research Center recently reported what seems to be a large drop in the percentage of teens who consider marriage to be important to them personally.[ii]

Here is what they found: 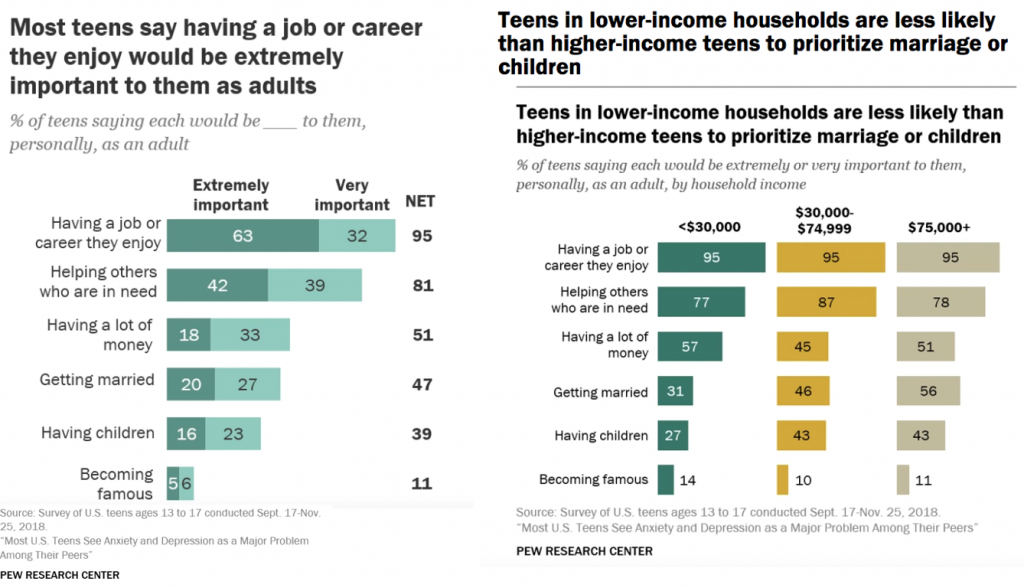 Such a stark difference in attitudes may be partially accounted for by differing methods of the two surveys. The Monitoring the Future survey asked the question only to high school seniors and asked about the importance of marriage and family. The Pew survey asked a wider age-range of youth (13-17) specifically about marriage (but not family). High school seniors might place somewhat more personal importance on marriage than their younger peers, but this would probably only account for a couple of percentage-point differences. Probably a more important difference is that the Monitoring the Future survey includes the personal importance of family and marriage, so this question may be picking up desires for children but not necessarily marriage.

Whether or not these differing questions and survey methods impacted this attitudinal trend, the recent Pew survey shows that most of today’s teens, especially lower income teens, are not placing importance on marriage as a personal life goal.

Another noteworthy shifting trend that is a hot topic in the media these days is the rapid rise in serious mental health problems among teens. One researcher is calling this shift an “epidemic of anguish.”[iii] Dr. Jean Twenge recently described the findings from a report released by The National Survey on Drug Use and Health which surveyed 600,000 Americans to gauge just how big this problem truly is.[iv]

Here is what the survey found:

While some have wondered if these increases might be due to a general increase in openness concerning mental health within society, Twenge insists that there is more at work here. Since these issues are predominately occurring in youth and young adults, she specifically blames the rise of social media and smartphones as the cause of the epidemic because the generation which she calls “iGen’s” is the heaviest user of this new technology. Other scholars think social media and smartphone use may play a role, but it is far from the only cause.[v] Regardless of the cause, there is little question that there has been a recent significant shift in mental health problems among youth and young adults.

Given these big changes in trends of mental health and attitudes toward marriage, youth RE may be the most crucial part of the entire RE portfolio. There is a tremendous need for good relationship education among youth. We spoke to Marlene Pearson about these recent studies. Marlene has been teaching relationship literacy to disadvantaged youth and young adults for nearly four decades. We wanted her perspective of how youth RE could help. Her response?
“The potential [of youth RE] is nothing short of a paradigm changer for a number of important goals: reducing risky sexual behaviors/pregnancy/STI prevention; boosting emotional, mental and social health; a restorative/healing potential for youth who’ve experienced trauma/adverse childhood experiences; and maybe our best bet for turning the tide of non-marital births and the disconnect between marriage and childbearing with the generation coming up.”

Big aspirations to go along with the big questions we’ve surfaced here. We need our best minds and hearts to help change the trajectory of these trobling trends for the benefit of our youth.

We would love to hear your responses to the questions we posed above. So we will open the comments function for this blog. Please feel free to share.

[i] This tables comes from the forthcoming State of Our Unions: 2019 report. It is based on the “Monitoring the Future” survey collected by the Survey Research Center at the University of Michigan.

If you're interested in contributing an article (or book) review to this blog, please contact us using the Contact Us form and let us know. We'd be happy to talk with you about your blog idea.